We know him as the founder of AlMaghrib Institute, our admirable “Hajj Coach,” creator of the all-too-savory Taraweeh Truffles. This year, Shaykh Muhammad Alshareef has gained a new title as one of The 500 Most Influential Muslims around the world for his contributions in development – two years in a row.

A new edition is published every year by the Royal Islamic Strategic Studies Centre of Amman, Jordan; new names are featured, some previous ones are removed, descriptions are revised. Among those listed are kings and politicians of the pan-Arab, pan-African Muslim world, religious and social activists, artists, developmental specialists, and key figures in the sciences.

With a background in Islamic law from the Islamic University of Madinah, and an expertise in marketing, communications and advertising, Shaykh Muhammad managed to single-handedly pave a legacy of personal development programs for Muslims in the West. His name can be found under “Development: North America-Canada” … Printed beneath his name is the following passage:

“Muhammad Alshareef is the founder of AlMaghrib Institute, an innovative Islamic educational institution that offers university-level instruction of Islamic studies through seminars and retreats. Alshareef is also the founder of DiscoverU project, an online community that offers resources and life coaches for those navigating ﬁnancial, marital or emotional obstacles in life. He is a highly-sought after teacher and public speaker” (pp. 117).

His influence stems largely from his engagement with the youth and, like the Bill Nye of science, Shaykh Muhammad gained a reputation of “popularizing” the deen. His “hip” Facebook page with 33,551 fans has been transformed as a platform for da’wah: clips about his Hajj expeditions are often posted there, information for his DiscoverU and NicheHero programs, as well as his Ramadan-special “Taraweeh Truffles”–the daily indulgence of fasting Muslims all across the globe. Thousands of Muslims have come into contact with his projects in one way or another, and his motto has touched the lives of them all: “No Blame, No Excuses. Only Results and Lessons.”

Launching it in 2002, AlMaghrib Institute will be marking its 10-year Anniversary at the start of the new year. This remarkable milestone reflects the seed he planted in a small city in Maryland that grew into a global organization serving over 35,000 Muslims worldwide a decade later. 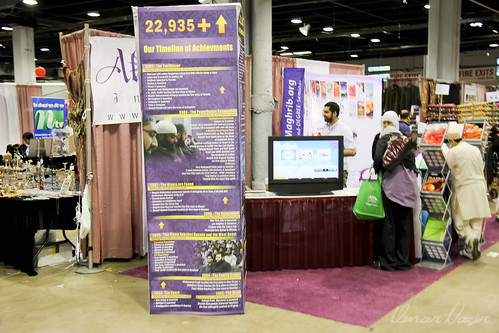 Under Shaykh Muhammad’s leadership and development, AlMaghrib Institute now operates in over 30 cities across North America, UK, and Malaysia through the hard work of a dynamic faculty and staff, a dedicated global volunteer force, and strong student support.

The legacy continues to grow through their collective teamwork and above all else, the Blessings of Allah (swt) insha Allah.